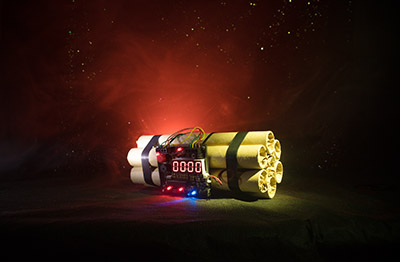 We kicked off our series on mobile app security last week with an overview of a couple key security features that are central to the App47 platform, including version management and authorized user controls.

This week, we thought we’d continue the conversation with a look at several new security features coming down the pike. Our engineering team is hard at work implementing these features, which will be included in tier 2 of our pricing plan. Without further ado, here’s what you can expect to see on App47 very soon:

No, this isn’t going to blow up your app. But time bomb will allow you to configure a policy in one of two ways:

In both scenarios, you can also configure the agent to wipe the app’s data if the policy is violated.

Currently, we have GeoFencing for the app store to control which apps are available in which countries. While this works great for the app store, we all know that mobile devices are, well, mobile.

To prevent an app from running outside of its allowed geographic area, the agent will now check during run time. GeoFencing will be configurable in one of two ways:

Like out other policies, you can configure this to simply shut down the app, or to shut it down and wipe the app data.

Finally, while devices have their own passcode, biometrics, and advanced security, you can also require your enterprise app users to provide and enforce an app PIN. This will be unique to the user and separate from the device PIN, although apps run by the same user will share the same PIN across devices (so users won’t have to remember different PINs for different devices).

The user will be able to manage his or her PIN via the app store, as well as to reset the PIN via the app and email authentication. This will ensure that not only is the device secure, but the app is running in the hands of an authorized user–not someone who picked up their phone and started flipping through Instagram.

Next week, we’ll continue our series on mobile app security with a look at app wrapping in the cloud. Tune into our blog next week to learn more about cloud-based app wrapping of both iOS and Android applications.

Finally, for more information on pricing or how you can start using these new features, contact sales@app47.com. We’d love to hear from you!